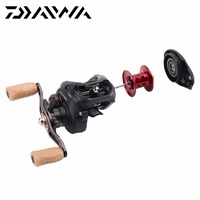 The Newest 2017 Daiwa Tatula CS 100 series baitcasting reel continues the tradition of the Tatula range of baitcasters. Superb quality, fit and finish combined with 2 choices of gearing and enhanced drive-train to make the Tatula CS series of reels one of the smoothest and most durable baitcasting reels available.

The Tatula weighs a meagre 205g thanks to its advanced alloy construction and includes proprietary Daiwa technologies such as TWS guide system and Magforce Cast Control for improved casting distances, Tournament Drag set-up for reliable and consistent drag pressures, Air-Rotation Spool enabling casting of lightweight lures and two CRBB bearings for saltwater use. A brilliant high-level baitcaster at mid-level pricing!

T-wing System
Daiwa's T-wing System solves an age old problem with baitcasting reel levelwind systems. The "T" aperture allos line to flow freely through the wide top section on outcast, reducing the normally sharp angles and friction that slow line flowing through a narrow aperture when exiting the reel. For retrieve, line drops into the narrow, lower channel of the T-wing for even distribution across the spool width.

Zaion™
The ideal material for lightweight reels. Lightweight strength and resistance to flexing rival that of Magnesium and will not corrode.