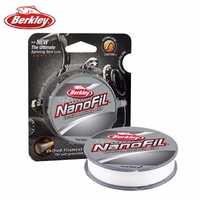 Winner of an EFFTEX award for best new product innovation in the lines.

The development of seven years research and formulation in the making. Berkley partnered with the legendary DSM facility to bring a new formulation of fishing line, it's not mono, it's not braid and it's not fluorocarbon. Berkley engineers have named it NanoFil and put it in it's own category "Uni-Filament".

Nano is fused using a patented heat process that binds over 300 Dyneema fibres together - most manufactures would use glue - however with Berkley's patented process these fibres resist separation like no other line. Nano casts further with less effort and lures run deeper because Nano is so thin that there is almost zero wind resistance and water drag. Its smooth outer means that it is highly abrasion resistant and the recommend knots for ultimate strength are the Double Palomar or improved Clinch Knot. For joining to fluoro or mono leaders Berkley recommend the Allbright double.